Harry Stoltzfus, a city commissioner in Anna Maria Island, has issues with a development backed by Ed Chiles, son of the late Gov. Lawton Chiles.

Stoltzfus is a transplanted Pennsylvanian and owner of a barge company. He came to Florida 15 years ago. The Chiles family has been in Anna Maria since the 1940s. Chiles owns the town's landmark Sandbar restaurant.

Chiles' project features two-story wood frame buildings with wide front porches and tin roofs, definitely an old Florida style. Stoltzfus objects to the parking plan, saying it requires people to back up over the sidewalk.

Now lawsuits are flying along with charges and countercharges. And there's a petition to recall Stoltzfus.  There may be an election Sept. 7. The town of Anna Maria Island is divided. St. Petersburg Times writer John Barry puts the tempest in paradise in perspective.

Here's the lastest take on the situation in The Anna Maria Islander. And here's a collection of stories about the Harry Stoltzfus matter, including one detailing how he called the mayor a donkey in an e-mail.

Here's another perspective from a blog about Anna Maria. And, finally, here's Harry Stoltzfus' blog.
Posted by T. Allan Smith at 11:14 AM 1 comment:


Alligator season in Florida is under way and runs until Nov. 1. There are four week-long harvest periods during the season. Last year 6,296 alligator hunting permits were issued and 7,729 alligators were taken.

Alligator hunting was a favorite Florida pastime in the 1880s and early 1900s. Winter visitors along the St. Johns River and elsewhere used to shoot alligators for sport from the decks of steamboats. Tales of hunting alligators in the Everglades abounded.

But by 1943 there were concerns about the demise of the alligator and hunting began to be regulated, but not terribly effectively. Illegal hunting continued into the 1960s, with sales of hides and meat bringing premium prices even as the populations were being decimated.

In 1967, the alligator was added to the endangered species list. New federal regulations with teeth gave law enforcement the tools they needed and the poaching era ended.

Alligator conservation had an astounding effect. The alligator rebounded rapidly in the 1970s, so much so that complaints of nuisance alligators increased significantly as residential development spread and alligator populations grew. There followed a period in which hunting nuisance alligators became a living for some Floridians.

For the last 20 years, annual hunting seasons for wild alligators have been regulated by the state as a way to control the alligator population without destroying it.

Phil Attinger, a correspondent for the Winter Haven News Chief accompanied alligator trapper Jim Webb on an alligator hunt recently. Webb, a lifelong hunter, decries the lack of respect some people have for wildlife, particularly alligators.

"Gators are a problem because people feed them," he said. "I hate to see it."
Posted by T. Allan Smith at 11:51 AM No comments:


Kudzu, that creepy crawly vine that is sometimes known to grow a foot a day and devour houses and cars, used to be quite popular in Florida and other parts of the southeast.

Back in 1876, a well-meaning Japanese delegation to the Centennial Exposition in Philadelphia, delighted American fairgoers with the sweet-smelling, fast-growing vine they used to shade their exhibit booth.

All over the south people began planting kudzu as a porch vine, according to Florida Curiosities: Quirky Characters, Roadside Oddities & Other Offbeat Stuff, a delightful book by David Grimes and Tom Becnel.

A Quaker couple, Charles and Lillie Pleas, moved from Indiana to Chipley in northwest Florida in the 1920s. They established Glen Arden Nursery and sold the plant to farmers by mail as forage for animals.

During the Depression, the Soil Conservation service promoted the vine as an erosion control plant species. The CCC planted kudzu far and wide.

In the 1940s, farmers could earn as much as eight bucks an acre to plant fields of the vines.

Little did anyone know that the vine would grow really, really well, and that it would grow up to be the scourge of the southeast. The problem is it chokes out other species, covers trees so densely it kills them, grows over abandoned houses and cars and anything else in its way.

Kudzu infestations got to be so bad that in 1972 the USDA declared it a nuisance weed. It's still a problem today. Just ask the public works folks in Quincy. The Gadsden County Times reports that creeping kudzu is such a problem that all city workers can do is treat it and cut it. There doesn't seem to be any way to stop it.
Posted by T. Allan Smith at 8:09 PM No comments:

UPDATE: The South Florida Sun Sentinel reports that the orphaned whale was spotted off Pompano Beach again on Friday. A NOAA biologist said this whale tale is not likely to have a happy ending.


UPDATE: The South Florida Sun Sentinel reports that the baby whale was spotted off Pompano Beach about 2 p.m. on Thursday.

An injured baby sperm whale that showed up Tuesday at a Miami Beach marina was gone by Wednesday morning, the Miami Herald reports. And it might have been a timely departure.

The hapless fellow had the Coast Guard in a dither, setting up a safety zone and broadcasting information to keep boaters and personal water craft riders from bringing further injury.

A NOAA marine biologist said the creature as pretty close to a newborn, and without its mother. The whale had been given some sedatives, but apparently a marine animal vet was going to put it down.

A strong current may have taken the baby whale back out into Biscayne Bay.

Below is raw video from the Associated Press posted on YouTube.

In Key West, the birds are spared

Fortunately saner heads prevailed in Key West where FAA officials wanted Key West International Airport to start taking potshots at birds that could be a hazard to  aircraft.

The Key West Citizen reports that the feds backed off of their demand after the county airport director pointed out that there are several species of endangered, threatened and rare birds found around the airport, among them, ospreys (above left), eagles, herons, and white-crowned pigeons.

Imagine the reaction of conservation groups if such a knuckleheaded idea had been implemented. More importantly, shooting birds at the airport could have been a hazard to the health of Key Westers. There are residential developments on three sides of the oceanside airport.
Posted by T. Allan Smith at 4:35 PM No comments: 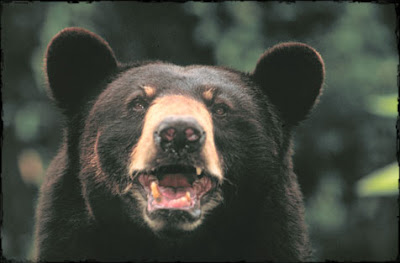 Photo by Jim Phillips | Southwest Florida Water Management District
Don't miss Jeff Klinkenberg's report in the St. Petersburg Times on the status of Florida's bear population, and especially of Jarhead, the young bear that got too greedy as he foraged for food.
Posted by T. Allan Smith at 3:31 PM No comments: