Weeki Wachee Springs, the famous Florida roadside attraction that became known as the home of the live mermaids, opened on this day in 1947.

Newton Perry, an ex-Navy frogman, created the attraction but he had to remove rusted junk from the spring first. Locals had used it as a dumping ground. Perry invented a way to breathe underwater from a free-flowing air hose supplying oxygen from an air compressor.  He had an 18-seat theater built and submerged six feet below the surface of the spring.

Perry trained young women to use the air hoses so they could stay underwater seemingly effortlessly to do the shows. He taught them how to smile underwater, and to drink and eat and do aquatic ballets there, too. The air hoses were hidden behind scenery.

Then he put a sign out on U.S. 19. In those days, U.S. 19 was not heavily traveled. It was paved but none of the other nearby road were, and there were few amenities. You could drive for miles without seeing a gas station or grocery store. And convenience stores hadn't been invented yet.

It was a pretty desolate place, and it's a wonder anybody came. There were so few cars that the performers ran out to the highway when they heard a car coming and waved travelers into the parking lot. Then they jumped into the spring to perform.

A couple of months after the attraction opened, Harper's Bazaar magazine published a photograph of a woman wearing a long evening gown floating in the spring. The photograph was by Toni Frissell, a well known fashion and portrait photographer in New York.

ABC bought the attraction in 1959, and then it really took off. ABC promoted it heavily on television. Arthur Godfrey, Don Knotts, Esther Williams and Elvis Presley all visited the attraction.

Today Weeki Wachee is a Florida State Park. Its general manager is former mermaid Robyn Anderson.
Posted by T. Allan Smith at 3:11 AM No comments:

The slaughter at Matanzas

On this day in 1565, French naval officer Jean Ribault and about 200 of his men were slaughtered by Spanish soldiers on the banks of the Matanzas River south of St. Augustine. If it hadn't been for his earlier accomplishments, Rebault might have been merely a footnote in history.

In 1562, Rebault led a Huguenot expedition to the New World to establish a colony for France. He explored the area around the mouth of the St. Johns River, then moved north and built a settlement on present-day Parris Island, S.C.


The settlement was named Charlesfort, for the king of France. He left a small group of men there and returned to Europe for more supplies and settlers.
He got caught up in the Religious Wars in Europe, was arrested in England and charged with spying so he couldn't return as planned. The group he left in the New World ran out of supplies, and, faced with hostile local tribes, built a crude open boat and set sail for Europe. Most didn't survive the trip.
In 1564, René Goulaine de Laudonnière, Ribault's second-in-command in the earlier expedition, returned to the New World and established a colony at the mouth of the St. Johns River, the area the two had explored two years earlier. He called it Fort Caroline.

Laudonnière met the local Timucua tribe who helped the Frenchmen at first. But soon Fort Caroline was beset with troubles and unrest. Some colonists took a ship and sailed to the Gulf of Mexico where they became pirates and attacked Spanish ships. The Timucua stopped helping the remaining colonists, who became increasingly disenchanted.

They were on the verge of revolt when Rebault finally returned from Europe with supplies and took control of Fort Caroline. Laudonnière was ready to depart for France, unhappy that he had been relieved of command.

But the Spanish, who had laid claim to Florida way back in 1513 when Juan Ponce de Leon first arrived, took a dim view of the arrival of the French. Pedro Menéndez de Avilés brought a Spanish fleet with the mission to remove the French Protestants from the New World. They attacked Ribault's ships near the mouth of the St. Johns but the weather was so bad that neither side prevailed. The deteriorating weather was an approaching hurricane. Menéndez sailed south and built a camp at St. Augustine near a Timucua village.

Ribault left Laudonnière with 100 men and sailed south to attack Menéndez at St. Augustine.  Menéndez sent men overland during the hurricane to attack Fort Caroline. They overwhelmed the fort, killing most of the men but sparing the women and children. Laudonnière escaped and eventually returned to Europe.

Meanwhile, Ribault's fleet got caught in the hurricane and his forces were scattered south toward where Daytona Beach is today. The ships were destroyed and Ribault and his men washed ashore. They started walking north along the beach. The Spanish found them at Matanzas Inlet. Ribault, believing his forces would be treated well, promptly surrendered.

But Menéndez had most of the survivors, including Ribault, executed.

Information from The Southern Colonies in the Seventeenth Century, 1607-1689 by Wesley Frank Craven, the Fort Caroline National Memorial Web site and Charlesfort: Return to Port Royal: 1564 by Chester B. DePpratter was used in this report.
Posted by T. Allan Smith at 12:01 AM No comments:

Death of the Barefoot Mailman

Today in 1887 James E. Hamilton, one of the famous Barefoot Mailmen, died at Hillboro Inlet near Pompano Beach. He was one of a cadre of public servants who delivered the mail along the southeast coast of Florida from Palm Beach to south of Miami. They walked along the beach because there were no roads.

The route was established in 1885 to deliver mail between Palm Beach and Miami. Before that, a letter from Palm Beach took a circuitous route by steamboat and train to Jupiter, Titusville, New York and Havana, Cuba, before arriving in Miami at least six weeks later.

The route along the beach took about a week, and included rowing boats across various inlets along the way.

In her book, Magnificent Mile, A History of Hillsboro Beach, Carmen Racine McGarry details the circumstances surrounding Hamilton's death. Hamilton was last seen in Hypoluxo on Oct. 10, 1887, a Monday. He was expected back the following Saturday but never returned. 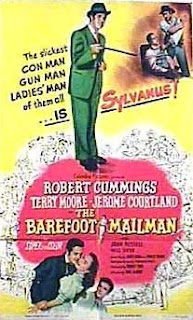 Two of his friends followed his route to find out what happened. They discovered his mail pouch, trousers and shirt hanging on a tree limb at Hillsboro Inlet. They found his underwear near the water's edge. They surmised that he had decided to swim across the inlet to get his boat.

His friends believed he was killed by alligators. Numerous gator tracks were found in the area. His body was never found.

The question arose why Hamilton's boat wasn't on the right side of the inlet as it was supposed to be. Locals became suspicious of a newcomer who had just arrived in the area. The man claimed that hunters had given him a ride across the inlet but he was suspected of having taken Hamilton's boat, an offense as severe as horse stealing in the old West.

The stranger was charged with tampering with government property but was acquitted in federal court in Jacksonville.

Theodore Pratt's 1943 book The Barefoot Mailman told Hamilton's story. A movie based on the book came out in 1951. It starred Robert Cummings and Terry Moore.

There is a plaque in memory of Hamilton at Hillsboro Inlet Lighthouse.
Posted by T. Allan Smith at 12:30 PM No comments: